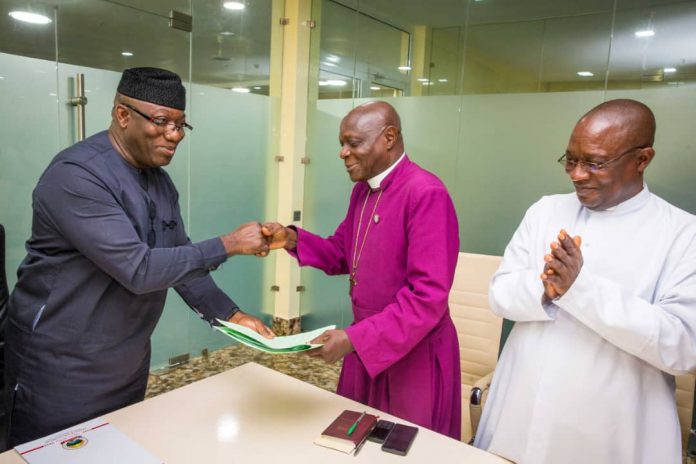 Christ School, Ado-Ekiti is a renowned academic institution attended by notable personalities in Ekiti State and Nigeria all over. The school, rich in history and academic excellence has been reunited with the Anglican Communion by the State Government.

On September 16, 2019, the administration of Governor Kayode Fayemi, in a bid to restore the leadership of the school to its original root, has signed a Memorandum of Understanding (MoU) with the Anglican Communion to hand over the control and ownership of the establishment.
Christ school remains an institution that has impacted the academic sector in Ekiti State and Nigeria as it continues to produce skilled individuals in various sectors of the nation’s economy and governance in general. It is important to say that Ekiti State Governor, Dr. Kayode Fayemi who also doubles as the Chairman, Nigerian Governors Forum is an alumnus of this institution amongst a host of others.

Governor Fayemi, while addressing representatives of Christ School after signing the MoU said this is done to enable the Anglican Communion takes its rightful place in the academic sphere of the state.
“I am profoundly delighted that a significant milestone is being achieved today in the process of the handing over of Christ School, Ado-Ekiti to the Ekiti Anglican Communion as part of the government’s agenda to return government-controlled schools to their original owners. Undoubtedly, Missionary bodies have played a very important role in the development of education system in Nigeria dated back to the 19th century with the founding of St. Thomas Anglican Nursery and Primary School by Reverend Charles Golmer in Badagry in 1843. Subsequently, many other Missionaries representing different denominations started various schools came into existence.

“These schools were known to instill discipline and moral values into the products of the school at that time, alongside intellectual activities they engage in. Christ School Ado-Ekiti came into existence at this time precisely 1933, established in the spirit of the founding fathers to provide western education based on spiritual and moral values, ingredients considered to be vital for building the total man that would positively impact the society.
“In the spirit of nationalism in 1966, these schools and some other privately owned academic institutions were being taken over by the government. More schools were under the control of the government after the Civil War. However, recently, it has been the case that the return of these Mission Schools to their original owners is being done to enable the missionaries assist the government in imbibing moral and spiritual values in our youths especially in a time of moral decadence.
“What we are witnessing here today therefore, is a continuation of a process we have started during our first tenure in office to ensure Christ School is returned to its rightful owners. I am glad today, that we are signing the Memorandum of Understanding for the release of Christ School to the Anglican Communion. This will champion the process for subsequent release of other missionary-owned schools in the state. We will be glad to see the Anglican Communion contribute their quota to this administration’s Agenda on Values Restoration through the school,” he said.
The MoU, which was prepared by the Anglican Communion, Administration and Alumni of the school, was approved by the government.
The Anglican Communion will now takeover the management and funding of the school as it was done by the Directorate of Education of the Christian Missionary Society (later Anglican Communion -Church of Nigeria) under the direct supervision of Henry Dallimore, the District Education Superintendent of CMS schools.