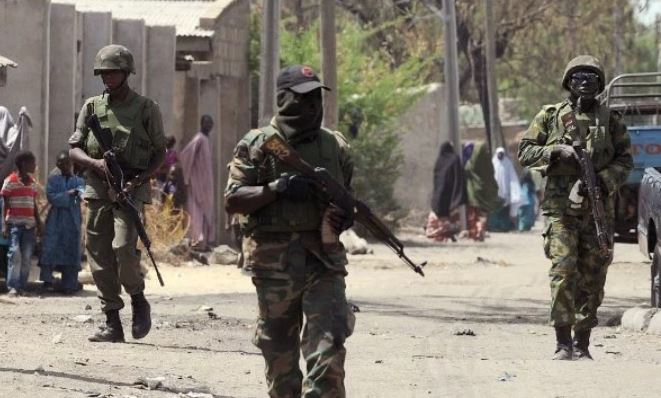 There is palpable tension in Osun ahead of the rerun election slated for Thursday, as hundreds of military personnel replace police to provide security during the exercise.

Our reporter on Wednesday morning observed heavy deployment of military men in Osogbo, the Osun State capital, and Ifon, in Orolu local government, while several other military vehicles were moving towards Ile-Ife.
A reliable security source told our reporter that the decision to change the security architecture of the state against the Thursday’s rerun election was mandated from the “top” to give some level of leverage to the ruling party.
DAILY POST reports that the rerun which was necessitated by the inconclusive gubernatorial election of Saturday was billed to take place in seven polling units at Osogbo, Orolu, Ife South, and Ife North local governments.
Meanwhile, there have been accusations and counter-accusations between the two leading parties in the contest, the ruling All Progressives Congress, APC, and the Peoples Democratic Party, PDP.
While the APC accused PDP of embarking on voters’ inducement by buying PVCs, the latter alleged that the ruling party was not only buying PVCs but criminally cloning it to manipulate electoral process to its advantage.
PDP also accused the APC government of victimising and threatening lives of some of its leaders, including a former ally of Governor Rauf Aregbesola, who recently defected to PDP, Alhaji Fatai Diekola.
However, DAILY POST has gathered that both APC and PDP are in desperate scramble to lure over three thousand voters in the seven polling units with money, ranging from N50,000 to N100,000.