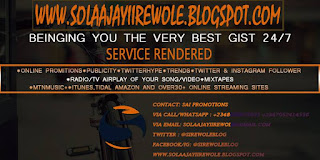 President Muhammadu Buhari recently appointed 42 traditional rulers as chancellors of some federal universities and the monarch was one of them.In a statement she personally signed in Ado Ekiti, Olujimi described the award as a confirmation that “Oba Aladesanmi is not only worthy, but also qualifies to lead such citadel of learning. I have no doubt that our Kabiyesi will perform beyond the President’s expectations …”

In another development, the Senator expressed shock over the death of the former Secretary to the State Government (SSG), Chief (Mrs.) Abike Sonoiki.

The deceased was the Eyegba of Ado Ekiti, a chieftaincy title bestowed on her by the Ewi of Ado Ekiti at the time of her demise. Olujimi described her death as unfortunate and a great loss to the people of Ekiti State, considering her contributions to the state’s development.

“I pray God to grant the family and the good people of Ekiti State the fortitude to bear this great loss,” she said.