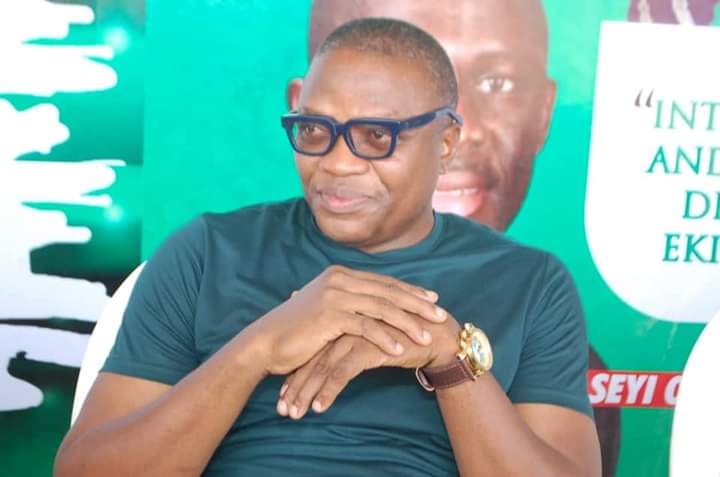 Ekiti Football Association Chairman Bayo Olanlege and five other members of the association have been released from Prison 24 hours after they were jailed 14 days by an Ekiti State Chief Magistrate’s Court, Ado Ekiti on Thursday, The PUNCH reports.

The six members of Ekiti FA were sentenced to prison for 14 days for contempt of court on Thursday by an Ekiti State Chief Magistrate’s Court, Ado Ekiti Magisterial District.

According to the Ekiti Football Association media official, Ayodeji Okunuga, the sextet are on their way to the Oluyemi Kayode Stadium to hold a press conference.

“They have been released by the Court in Ado Ekiti and they will be addressing the media soon,” Okunnuga told The PUNCH.

The plaintiffs, Segun Adelakun, Olu Ikusemori and Ajayi Lanre had through their counsel, Opeyemi Ogunremi, on May 5, 2019, brought an order pursuant to section 52 of Ekiti State Magistrate Court Law, 2014 to the court, seeking for an order committing the six FA members to prison for disobedience to the order of court made on April 18, 2019.
The plaintiffs had brought an ex-parte motion to the court on March 27, 2019 seeking the court to restrain Olanlege and the other five officials from further parading themselves as members of executive of Ekiti State Football Association pending the determination of suit against them.

In his pronouncement on Thursday, Chief Magistrate Adesoji Adegboye stated, “The order which sought to commit the defendants to prison for disobedience to the order of this honourable court made on 18/04/2019 is hereby granted.”
But counsel to Olanlege and the five others, Femi Famolusi, said at the press conference in Ado Ekiti on Friday that the committal order was made in error because football matters were not for courts and that the applicants had approached the court without going through normal processes.
Famolusi said, “Convinced that the order was granted in error on Thursday, we put up an application in court seeking vacation of the committal order because these people (the defendants) committed no crime. Thankfully, the order was vacated this (Friday) morning. The game of football has won.

When the order was handed down on Thursday that they were convicted for contempt, I said no order was violated and I stood my ground. There and then, I considered what happened on Thursday to be the lowest moment for the judiciary in Nigeria and for the rule of law and for the administration of justice.

The Nigeria Football Federation Statute is clear as to what should be the precedence for aggrieved members of a football association before they can approach a regular court. The law is clear that they should first approach an alternative way of resolving dispute. But the accusers boycotted and bypassed the process.

“Those who took what was meant to be an in-house and domestic affair to court apparently cannot say they are deep lovers of football. Unfortunately, we are in a society where when people cry foul, they do not check whether they are saying the truth. But thankfully, the truth prevailed and that is why we are here at this press conference,” Famolusi said.

In his reaction, Olanlenge, who said he was not rattled by the turn of events on Thursday, added that he was rather embarrassed that some individuals were bent on thwarting efforts to develop football and sports in the state.

The Ekiti FA boss said though litigation was good for the system, “it has to be done in the right way. You need to report to the right authorities in the Nigeria Football Federation. You don’t take football matters to court and that is very important and that has to be abided by.”
Ondo State FA chairman, Otunba Dele Ajayi, who represented the FA chairmen across the country, said it was unfortunate that the football issue was taken to court, but expressed joy that “the truth has prevailed.”

Ajayi said, “Football is a competition; if you lose today, you can win tomorrow. We are one family. Our disagreements ought to be settled amicably instead of going to the courts. What is happening in Ekiti today (Friday) happened in Ondo State and we did not go to court, we resolved it amicably. Today, football is moving forward.”

Ajayi said, “Football is a competition; if you lose today, you can win tomorrow. We are one family. Our disagreements ought to be settled amicably instead of going to the courts. What is happening in Ekiti today (Friday) happened in Ondo State and we did not go to court, we resolved it amicably. Today, football is moving forward.”