I have tried as much as possible to stay clear off any issue that has to do with “Kokun Foundation” but I won’t let this slip away.

The very first day I stumbled upon his Instagram page and the numerous Food Charity thing, a part of me is not comfortable as I believe there is more to it 🤔
Anyway, what can I say? There is hunger in the land and some people can go to any length to get something to eat.
Earlier this year, Mr Kokun promised to buy a Wheel chair for a crippled lady and also promised to open a shop for her 😩 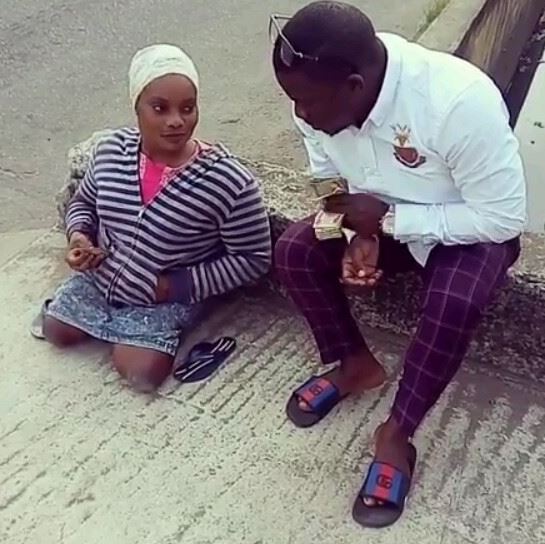 He was quick to share the Picture of himself and the lady on Instagram with hundreds of comments thanking him for his rear kindness.
However, his promise almost landed the poor lady in more trouble after a young man saw the lady still begging on the Street of Lagos and was very angry. His believe was that the lady was not contented with all Mr Kokun did and that she has resorted to begging again after all what Mr Kokun has done for her.
That was when the secret blew open after the lady opened up that Mr Kokun only gave her ₦1,000 and that was the end 😳
The young man took to his Instagram page to inform Nigerians that Mr Kokun did nothing to assist the poor lady other than the ₦1000 he gave her – All Hell was let loose as Nigerians rain insults and curses on Mr Kokun who later came online to clear the issue promising to do all he promised.
Well, A Non Nigerian man took to his Instagram page to share his Views on what he thinks about Mr Kokun.
Watch below:-
Video Player

00:00
00:00
.
DOWNLOAD THIS VIDEO
According to him, Mr Kokun goes about the Street of Lagos sharing food to the less privilege with a Gucci bag full of Money.
Looks like a Rogue, criminal – he claimed.

What Do You Think About What He Said?

Highlander168 said:-
Bro the truth is most NGO or foundation in Nigeria r doing the business for their self interest Now think of it do you think they do it for free..
Most them of them get sponsors and almost has an helping hand in abroad most reach out to an independent organisation abroad for help that they r into charity and get millions check then spend peanut and show it of media like they doing give thing.
How much is all this hollow rice compare to what they get so you think the man will be so stupid to be spending his own personal money.

Hugesss said:-
Nigerians are distracted by poverty to see the truth. Poverty has eaten the sense of Nigerian that’s why they can never think for themselves which makes them so gullible. Kokun is scamming Nigerians.

Mafia_manager007 said:-
Thank God it was a non Nigerian that said this. Because personally I think what that guy is doing is simply exploiting the situation of this people to get himself fame and paid.

Omohade22 said:-
I called him out sometimes ago regarding he’s exploit, cos I witnessed one of he’s bad deeds that sent an innocent boy to early grave only for the idiot to tell me that if I want to prove him wrong then I should come to he’s office and face him.
As if I knew that the idiot will block me for speaking the truth, I decided to munch our conversation. The guy is a real thief. Wish I can send the munched pictures here.