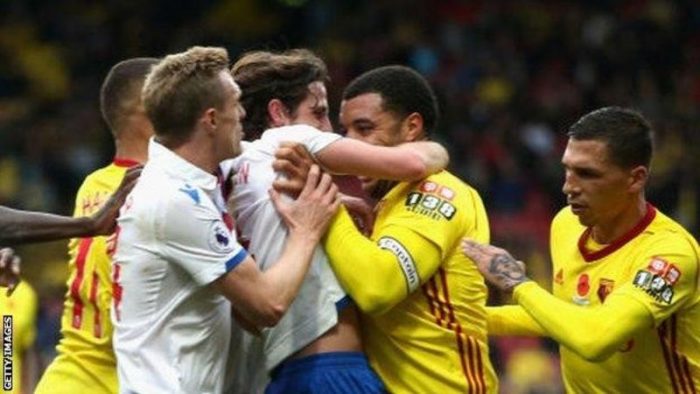 Watford captain Troy Deeney has been charged with violent conduct by the Football Association following a clash with Stoke midfielder Joe Allen.

Deeney and Allen were booked after squaring up in injury time of the Hornets’ 1-0 league defeat on Saturday.
Allen reacted angrily when Deeney appeared to attempt a cross, rather than pass the ball back, when Stoke kicked the ball out after an injury.
Deeney has until Tuesday at 18:00 GMT to respond.
Stoke boss Mark Hughes said after the Vicarage Road game that striker Deeney, who appeared to grab Wales international Allen’s face, should be punished.
“Clearly we kicked the ball out and the right thing to do in the spirit of the game is throw it back,” he said.
“Deeney, the captain of the club, should know better but he shaped to play it into our box and that’s why Joe reacted.
“More often than not those situations get revisited by people in authority and decisions are made as a consequence.”